Through HTML5 and the corresponding standards, modern browsers get more standarized features with every release. Most people have heard of websockets that allows you to easily setup a two way communication channel with a server, but one of the specifications that hasn’t been getting much coverage is the webrtc specificiation. <p> </p> With the webrtc specification it will become easier to create pure HTML/Javascript real-time video/audio related applications where you can access a user’s microphone or webcam and share this data with other peers on the internet. For instance you can create video conferencing software that doesn’t require a plugin, create a baby monitor using your mobile phone or more easily facilitate webcasts. All using cross-browser features without the use of a single plugin. <p> </p>

Update: in the newest versions of the webrtc spec we can also access the microphone! See here for an explanation! Update:This article is translated to Serbo-Croatian language by Vera Djuraskovic from Webhostinggeeks.com.

As with a lot of HTML5 related specification, the webrtc one isn’t quite finished yet, and support amongst browsers is minimal. However, you can still do very cool things with the support that is currently available in the development builds of Opera and the latest Chrome builds. In this article I’ll show you how to do use webrtc and a couple of other HTML5 standards to accomplish the following: 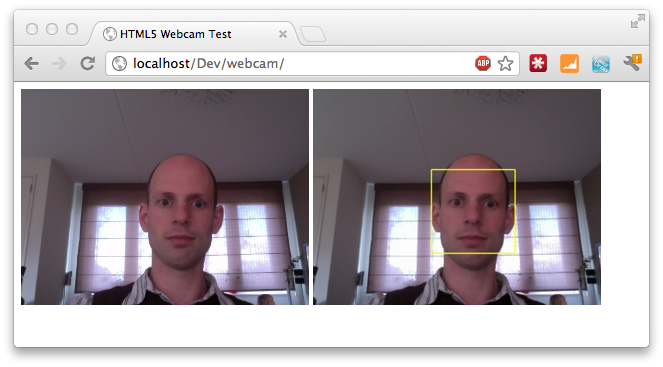 For this we need to take the following steps:

In other words, we’re going to create a real-time face detection system, where the frontend is completely provided by ‘standard’ HTML5/Javascript functionality. As you’ll see in this article, we’ll have to use a couple of workarounds, because some features haven’t been implemented yet.

Which tools and technologies do we use

Lets start by looking at the tools and technologies that we’ll use to create our HTML5 face detection system. We’ll start with the frontend technologies.

What do we use at the backend:

Frontend step 1: Enable mediastream in Chrome and access the webcam

Let’s start with accessing the webcam. In my example I’ve used the latest version of Chrome (canary) that has support for this part of the webrtc specifcation. Before you can use it, you first have to enable it. You can do this by opening the “chrome://flags/” URL and enable the mediastream feature: 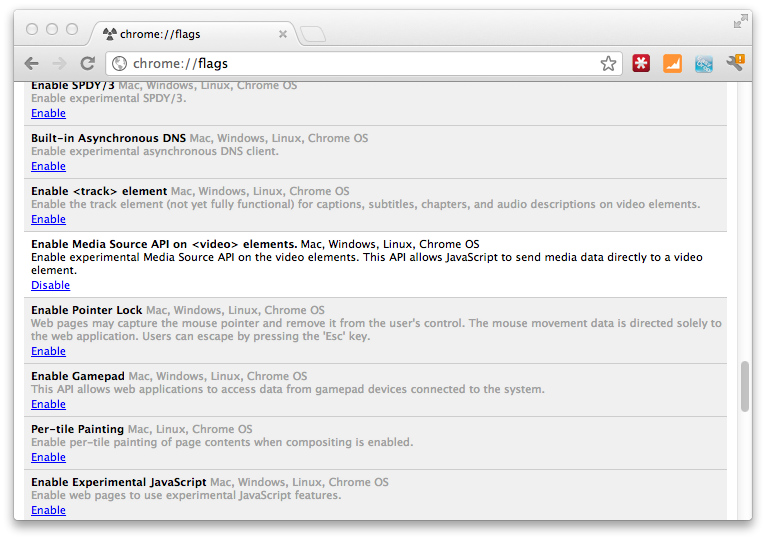 And the following javascript: 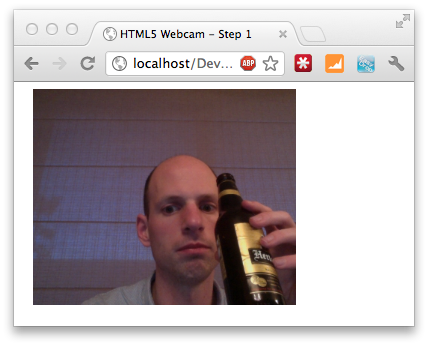 The next thing we want to do is send this stream, using websockets, to the jetty server.

In this step we want to take the data from the stream, and send it as binary data over a websocket to the listening Jetty server. In theory this sounds simple. We’ve got a binary stream of video information, so we should be able to just access the bytes and instead of streaming the data to the video element, we instead stream it over a websocket to our remote server. In practice though, this doesn’t work. The stream object you receive from the getUserMedia function call, doesn’t have an option to access it data as a stream. Or better said, not yet. If you look at the specifications you should be able to call record() to get access to a recorder. This recorder can then be used to access the raw data. Unfortunately, this functionality isn’t supported yet in any browser. So we need to find an alternative. For this we basically just have one option:

A bit of a workaround that causes a lot of extra processing on the client side and results in a much higher amount of data being sent to the server, but it works. Implementing this isn’t that hard:

Not that much more complex then our previous piece of code. What we added was a timer and a canvas on which we can draw. This timer is run every 250ms and draws the current video image to the canvas (as you can see in the following screenshot): 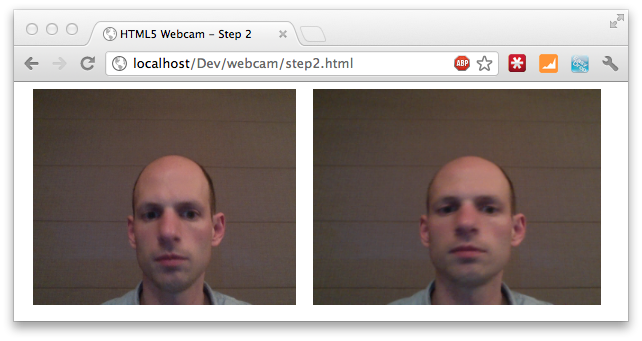 As you can see the canvas has a bit of a delay. You can tune this by setting the interval lower, but this does require a lot more resources.

The next step is to grab the image from the canvas, convert it to binary, and send it over a websocket. Before we look at the websocket part, let’s first look at the data part. To get the data we extend the timer function with the following piece of code:

The toDataURL function copies the content from the current canvas and stores it in a dataurl. A dataurl is a string containing base64 encoded binary data. For our example it looks a bit like this:

We could send this over as a text message and let the serverside decode it, but since websockets also allows us to send binary data, we’ll convert this to binary. We need to do this in two steps, since canvas doesn’t allow us (or I don’t know how) direct access to the binary data. Luckily someone at stackoverflow created a nice helper method for this (dataURItoBlob) that does exactly what we need (for more info and the code see this post).At this point we’ve got a data array containing a screenshot of the current video that is taken at the specified interval. The next step, and for now final step, at the client is to send this using websockets.

Using websockets from Javascript is actually very easy. You just need to specify the websockets url and implement a couple of callback functions. The first thing we need to do is open the connection:

Assuming everything went ok, we now have a two-way websockets connection. Sending data over this connection is as easy as just calling ws.send:

That’s it for the client side. If we open this page, we’ll get/request access to the user webcam, show the stream from the webcam in a video element, capture the video at a specific interval, and send the data using websockets to the backend server for further processing.

The backend for this example was created using Jetty’s websocket support (in a later article I’ll see if I can also get it running using Play 2.0 websockets support). With Jetty it is really easy to launch a server with a websocket listener. I usually run Jetty embedded, and to get websockets up and running I use the following simple Jetty launcher.

A big source file, but not so hard to understand. The import parts are creating a handler that supports the websocket protocol. In this listing we create a WebSocketHandler that always returns the same WebSocket. In a real world scenario you’d determine the type of WebSocket based on properties or URL, in this example we just always return this same one. The websocket itself isn’t that complex either, but we do need to configure a couple of things for everything to work correctly. In the onOpen method we do the following:

This enables support for binary message. Our WebSocket can now receive binary messages up to 512KB, since we don’t directly stream the data, but send a canvas rendered image the message size is rather large. 512KB however is more then enough for messages sized 640x480. Our face detection also works great with a resolution of just 320x240, so this should be enough. The processing of the received binary image is done in the onMessage method:

This isn’t really optimized code, but its intentions should be clear. We get the data sent from the client, write it to a bytearray with fixed size and pass it onto the faceDetection class. This faceDetection class does its magic and returns the processed image. This processed image is the same as the original one, but now with a yellow rectangle indicating the found face. 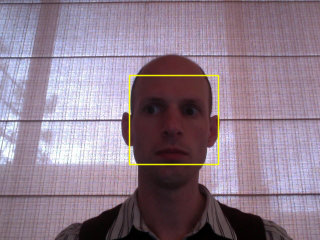 This processed image is sent back over the same websocket connection to be processed by the HTML client. Before we look at how we can show this data using javascript, we’ll have a quick look at the FaceDetection class.

The FaceDetection class uses a CvHaarClassifierCascade from JavaCV, java wrappers for OpenCV, to detect a face. I won’t go into too much detail how face detection works, since that is a very extensive subject in it self.

The code should at least explain the steps. For more info on how this really works you should look at the OpenCV and JavaCV websites. By changing the cascade file, and playing around with the minsize, group and scale properties you can also use this to detect eyes, nose, ears, pupils etc. For instance eye detection looks something like this: 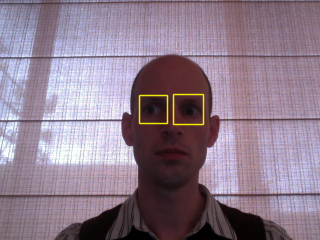 The final step is to receive the message send by Jetty in our webapplication, and render it to an img element. We do this by setting the onmessage function on our websocket. In the following code, we receive the binary message. Convert this data to an objectURL (see this as a local, temporary URL), and set this value as the source of the image. Once the image is loaded, we revoke the objectURL since it is no longer needed.

We now only need to update our html to the following:

And we’ve got working face recognition: 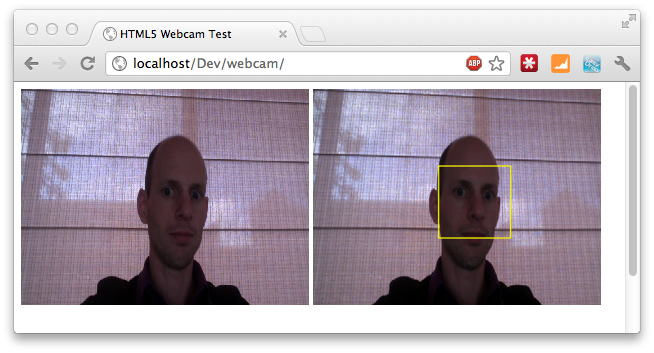 As you’ve seen we can do much with just the new HTML5 APIs. It’s too bad not all are finished and support over browsers is in some cases a bit lacking. But it does offer us nice and powerful features. I’ve tested this example on the latest version of chrome and on Safari (for Safari remove the webkit prefixes). It should however also work on the “userMedia” enabled mobile safari browser. Make sure though that you’re on a high bandwith WIFI, since this code isn’t optimized at all for bandwidth. I’ll revisit this article in a couple of weeks, when I have time to make a Play2/Scala based version of the backend.